For the 12th year, Danube Day saw the countries of the Danube Basin strongly united in celebration of their rivers. Events brought individuals, communities and countries together. They reconnected people with their natural environment and rich cultural history. Actions foster a collective effort that is also forward-thinking, working to produce a positive future for all the inhabitants of the Danube region. 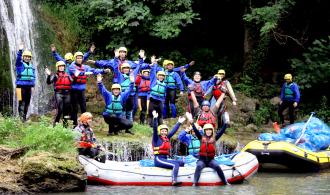 550 organisations - from government, scientific, business and civil society sectors - jointly hosted Danube Day. The result was 250 events in 6 capitals (Vienna, Bratislava, Budapest, Ljubljana, Zagreb and Belgrade) and hundreds of towns and villages across 12 countries. In Romania, 8000 people got active at events in every Danube county. In Slovakia, 4000 residents enjoyed festivities at Gabčíkovo. Events were held in all 7 of Bulgaria's Danube provinces and 11 Serbian towns and cities.

Around 25,000 people directly joined in activities in 2015. We got active on, in and beside our rivers. We filled bin bags to clear riverbanks; sang and danced at folk festivals and rock concerts; met bike and canoeing challenges; sampled fabulous food and wine; learned about water science and debated river management proposals. We also got inspired in art competitions. 1300 children from 200 schools took part in the basin-wide Danube Art Master contest, producing a plethora of imaginative river-based costumes fit for a grand Danube Masquerade. Involvement in this way ripples out into the wider population, helping to generate a collective solidarity and shared responsibility across the 83 million inhabitants of the Danube Basin.

Read on to find out about the national and cross-border festivities in each country or view highlights in the photo gallery below. The events are reliant on the 550 organisations that worked together to make Danube Day 2015 a day to remember: download the 2015 Danube Day Partners list.

In Germany, events encouraged involvement in river management decisions and highlighted the importance of clean rivers. In Gögglingen, Baden Württemberg, the public was consulted over plans for sustainable river improvements south of Ulm. In Bavaria, Rott am Lech’s new 1.2 million waste-water plant was opened. The first of its kind in Bavaria, the new technology will bring cleaner rivers – from the Rottbach stream to the Lech river and through to the Danube and nine downstream countries. Whilst in Ulm/Neu-Ulm, a colourful play area was set up in the Donaubüro for children to learn about beavers. Click here for organisers or read Germany’s national page for news of this year’s events.

Austria celebrated in Vienna, where rivers took over the Museumsquartier with interactive games, fascinating facts, creatures, crafts and competitions. New this year was a climbing tower, giving a bird’s-eye view of all the fun - from children rushing around in the Danube Puzzle Race to police boats, entertainers, choirs, info stalls and a menagerie of animals. 800 people visited the event opened by Federal Ministers Jörg Leichtfried and Andrä Rupprechter and Vienna Environment Councillor Ulli Sima. 2015 also saw the 9th Danube Challenge. Pupils from across Austria took part in river adventure days in national parks, undertaking crazy tests of skill and river knowledge.  Click here for organisers or read Austria’s national page for news of this year’s events.

Slovakia got active at Gabčíkovo with a family festival: 4000 visitors enjoyed a day of exhilaration and entertainment! Opened by the Minister of the Environment, visitors enjoyed free boat trips through the locks; helicopter rides over the dam; tours of the hydro plant; aqua-zorbing; archery, horse-riding and, of course, fish soup cooking. Pop stars, Kristina and Mike Spirit, entertained on the main stage; while river rescue and dog squads demonstrated their skills. Along with puppet theatre, story-telling; magic and bubble shows, a mini zoo, fun science activities and prize-giving for the Danube Art Master contest, there was something for everyone. Click here for organisers or read Slovakia’s national page for news of this year’s events.

In Slovenia, hundreds of children showed off their creativity in three exciting national youth events. For budding comedians, the 7th My River.si challenge was a tough one: to write a stand-up routine on rivers and sustainable development! The best acts performed at the Ljubljana City Museum in front of rap artist, Zlatko, and kayaker, Jost Zakrajšek. Creativity in the form of 3D art was the key to the 2015 Danube Art Master crown. The title went to pupils from Helena Pulhar primary in Kranj for their ‘Together for a Better Life’, showing children aboard a sail-boat amid giant fish. Whilst, talents in research, art and science came to the fore in the Water Detectives competition involving 600 students from 28 schools. Click here for organisers or read Slovenia’s national page for this year’s events.

Croatia, with the ICPDR Presidency in 2015, held a celebration linking the Danube towns of Vukovar and Ilok. Government, stakeholders and local people gathered in Vukovar for speeches and festivities. A cruise to Ilok saw Ivica Plišić (Director of Croatian Waters) and Dražen Kurečić (ICPDR President) cast a wreath of remembrance into the waters. Public festivities involved song, dance, food and crafts. An ICPDR stakeholder conference followed in Zagreb in July. The ‘Voice of the Danube’ secured essential stakeholder and public involvement in the finalisation of basin-wide management plans. Fairs celebrating river life were also held in Slavonski Brod and Županja as part of the ‘Our Beautiful Sava’ project. Click here for organisers or read Croatia’s national page for this year’s events.

In Bosnia-Herzegovina, Iman Maljić from the Aleksa Santic school in Sarajevo beat off stiff competition from pupils from 190 schools in 11 countries to become the International Danube Art Master for 2015. This year's challenge was to create a costume fit for a grand Danube Masquerade but made only from materials found by rivers. Iman's creation - Black Swan - was voted best costume from over 600 entries made by 1,314 children. As part of her prize, she was invited to the United Nations in Vienna, where she addressed ministers and ambassadors on the need to protect rivers. See the website of the national organiser, Ekotim, to find out more and view some of the costumes on Flickr. Click here for organisers or read Bosnia-Herzegovina's national page for this year’s events.

Romania was mobilised for action with 120 events in all 11 Danube Water Basin Administrations (WBA). Tulcea's event brought together national and local authorities, institutions and NGOs from across the region. 300 children from 7 districts joined a simultaneous bank clearing operation to remove rubbish in Sulina, Maliuc, Mahmudia, Partizani, Murighiol, Crişan and Sfântu Gheorghe. Collecting over 2,500 bin-bags, their reward of fun workshops was richly deserved. River issues and sustainable development were debated at public seminars and WBA meetings. Authorities and NGOs hosted festivals, clean-up actions, workshops, eco-activities, field trips and all manner of art, sport and musical entertainment. Among highlights, Galaţi hosted river-inspired theatre, concerts and film. Volunteers took to the On the Crişul Repede for rafting and an 8km clean-up action. Click here for organisers or read Romania's page for this year’s events.

Bulgaria's extravaganza got 1000s active in 11 towns in all 7 Danube provinces. A clean-up campaign got residents active along the entire Danube course. Baykal residents gathered for their annual casting of flowers into the waters and enjoyed a traditional feast. Oryahovo planted an avenue of trees to symbolize unity of the Danube countries. Belene's events included a cycle tour; Lom's three-day festival focussed on fish cuisine; and Tutrakan celebrated with a regatta. Kozloduy got active in a fishing contest and guided river trips. Workshops highlighted art and ecology in Svishtov; boat making in Silistra and youth debate in Vidin. Ruse showcased wine in Blue Danube Week and screened archival footage of the river. Click here for organisers or read Bulgaria's page for this year’s events.

Moldova combined river management decision-making with youth celebration. A meeting of Lower and Middle Prut authorities highlighted progress in implementing the Danube Strategy and identified options for closer cooperation. Festivities followed with a children’s festival. Evocative voices and age-old tunes rang through the air, complemented by the beauty of the children's traditional costumes. Creation of a very different outfit won Ionela Chercheja from Ghindesi the Moldovan Danube Art Master crown. Her 'Disappointed fisherman' depicted a boy dressed in clothing made from upcycled riverside rubbish. Ionela went on to win 2nd place in the contest's international final. View the winning artworks on Flickr. Click here for organisers or read Moldova's page for new events.

The ICPDR would like to thank all the organisations involved in Danube Day 2015.