Danube Day 2018 heralded the 15th time the region was brought together to celebrate their rivers. The event’s longevity is testament to the immense role of the Danube rivers in the economic, environmental and cultural vitality of the region. 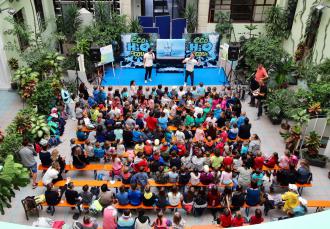 Reaching this milestone prompted reflection on the progress that has been made since the first Danube Day in 2004. The event has proved pivotal in sustaining cross-border cooperation between the 14 countries and encouraging Danube awareness among their 81 million residents. It plays a vital role in securing a thriving future for both people and wildlife.

When the ICPDR began planning the inaugural festival, it was beyond our ambitions that it would become the huge, established event that we now see.

In 2018, 600 partner organisations held well over 200 actions in 14 countries. Rather than the original one-day festival, it’s become an annual summer season in some countries, stretching over 3 months. Back in 2004, we talked about thousands celebrating the first event; in 2018, we measured participation in the tens of thousands. 2018 was among the most well-attended events to-date, with around 30,000 people directly taking part and getting active for a healthier Danube.

Danube Day prides itself on being the biggest river party in the world. Government, NGO and corporate partners worked hard to ensure a spread of events across the entire Basin. So, we were particularly pleased to welcome Montenegro back into the fold after a four year gap. Read on to find out about their festivities in Durmitor National Park, as well as other national highlights and a gallery of images capturing events from all 14 countries. See also the international events section below to read how the ICPDR marked the 15th Danube Day at the UN Vienna International Centre. If the next 15 years can deliver the same level of cross-sector and cross-border cooperation, we will be well on our way to securing a sustainable future.

The ICPDR would like to thank everyone involved in Danube Day 2018.

National highlights in all 14 Danube countries

In Ukraine, Zakarpattya’s day was full of colour and innovative ways to engage young Danubians, including a pirate’s regatta and eco-knights quest to combat plastic pollution! These new heroes inspired children in Kvasovo to craft fabulous boats from plastic waste, complete the knights’ eco-challenge and take to the stage to persuade people to reduce plastic waste. Highlights included the knights’ duel; canoe trip accompanied by plastic boats; and knighting of young people for services to rivers! Whilst in the Danube Delta, WWF championed sturgeon conservation with a day of fun educational activities in Vylkove.

Moldova's Danube Day took place close to the banks of the Danube-Prut confluence in Djurdjulesti. Folk teams entertained a thousand residents and government and embassy officials who gathered to celebrate the region’s rich traditions and a sustainable future. Hosted by the Ministry of Agriculture, Regional Development and Environment, water resource projects were presented, including the newly-designated Lower Prut UNESCO Biosphere Reserve.

In Romania, 60 actions saw thousands get active across all 11 Water Basin Administrations. Minister Ioan Denes was joined by one hundred specialists and stakeholders for a main event in Orșova. A parallel children’s festival educated future river stewards on how to ensure waters are fit to drink and safe for wildlife. While Galati’s 4-day extravaganza featured a spectacular light show, parade and flashmob.

Bulgarian festivities took place in all 7 Danube provinces, motivating 2500 visitors to cycle, cook, fish, get creative and clear rubbish for the Danube. In Belene, WWF enlisted locals to take action for sturgeon conservation. In Rousse, 200 musicians performed Danube pieces at the State Opera House; and in Sofia, experts discussed climate change and trends in water resources.

Montenegro joined the celebrations in 2018, with a festival at the breathtakingly beautiful Crno jezero in Durmitor National Park. Run by the Ministry of Agriculture and Rural Development and Zabljak Tourist Organisation, families enjoyed boating, orienteering, woodland art and eco workshops.

In  Serbia, three months of celebration began in Belgrade and spread out to Bela Crkva, Stara Palanka, Veliko Gradište, Bačka Palanka, Novi Sad, Pancevo and Ćuprija! Enthusiasm for rivers was nurtured through workshops, boat trips and regattas. The Zemun Quay trail saw children navigate between fun activities, learning about rivers along the way. Drawing solidarity symbols onto stones, they threw them into the water to send their heartfelt ’water-mail’ to children living in downstream countries.

In Bosnia-Herzegovina, Ekotim hosted the national Danube Art Master awards and organized a school trip to the Bosna spring. Learning about conserving water resources and the importance of maintaining wildlife diversity, the visit fostered a desire to protect rivers and the wider Danube Basin.

In Croatia, community action in Ilok resulted in the clearing of 2km of riverbank at an event organised by Hrvatske vode, local groups and Coca-Cola HBC. A workshop on protecting Danube resources also took place near Osijek. While, at Zlatna Greda, the Green Osijek Eco Festival celebrated both Danube Day and the anniversary of the Mura-Drava-Danube Biosphere Reserve.

Slovenia's festivities empowered an impressive 11,000 people to take action for a sustainable future. At the Bled Water Festival, expert panels and participants from 8 countries tackled barriers to sustainable water management, and children were awarded prizes for innovative environmental projects. Sustainable tourism was debated at the 4-country Sava Youth Parliament organised by the ISRBC. While, in the Environment Ministry's 'Moja reka -My river’ contest, volunteers cleared a mighty 80 tonnes of waste!

In Hungary, community and professional events reached tens of thousands of people. In Érsekcsanád, Hungarians and Serbs shared music and friendly rivalry in sport and fish soup cooking, and heard river management speeches by ICPDR and state officials. Győr’s water-based fun was a hit at the Győrkőc youth festival; while the Danube Children’s Festival found a new home at Budapest Zoo. Also in the capital, an international conference highlighted action on plastic pollution.

In Austria, Danube Day fun filled Vienna's Stadtpark, where a thousand children, including a delegation from Romania, enjoyed eco challenges, fascinating facts, creatures, crafts and competitions. Compered by TV star, Robert Steiner, it showcased Danube diversity and nurtured young people’s enthusiasm to protect it. Catch a flavour of the day from Danube Day Austria's video and facebook stream. An exhibition to mark 24 years of basin-wide cooperation was held at the Vienna International Centre: read about it on the ICPDR website.

In Germany, Bavarians got active with bank clean-ups in Neuburg, a mass river swim at Ingolstadt and tours of the floodplain forest at Schloss Grünau. Environment Minister Huber signed a declaration creating a ‘human-free’ Danube island. In Baden-Württemberg, the International Danube Festival opened with a parade of 650 flags representing Danube diversity, and designed by Serbian and Croatian artists. During the festival, visitors could explore large-scale interactive models designed to promote understanding of the causes of flooding and ways to revitalize river environments.